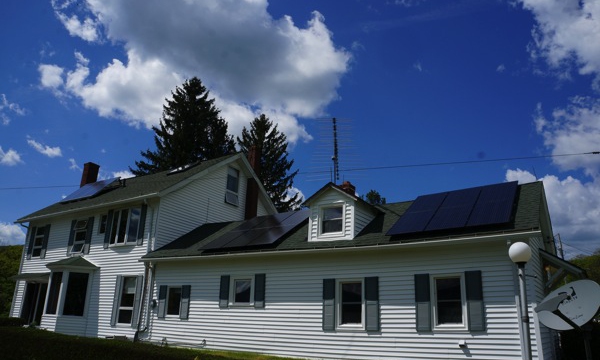 This past weekend, I spent time with family in the beautiful Catskill mountains. On the rainy day, we all became quickly frustrated with the speed of our pokey DSL internet connection.

In the FCC’s sixth broadband deployment report from 2010, the Commission redefined broadband as a minimum of 4 Mbps down and 1 Mbps up. A report today indicates that the Commission is considering upping the threshold of broadband to 10 Mbps down or higher.

Being far from the central office, Verizon indicated that we are lucky to have DSL at all and can not offer more speed, due to the noise in the length of the copper run.

While cable service is available in the denser Village of Hunter, the local Time Warner franchised monopoly will not run cable to the more widely spread out houses in the Town of Hunter.

So, what options are available?

AT&T has 4G LTE service from a tower on Hunter Mountain. This provides solid speeds, at over 20 Mbps. However, it only offers that speed for a fraction of a month. All of AT&T’s LTE plans have bandwidth caps. 10 GB of data per month at 20 Mb/second is approximately 4000 seconds of peak bandwidth, or just over one hour per month.2

Of course, even streaming video and downloading files is unlikely to use the full bandwidth available in a connection, so the lowest tier data cap is usefully for more than that. But metered broadband limits the use of the internet, just like metered dial-up AOL access in the mid-90’s.

When you think about the cost of streaming a movie, you’re less likely to stream a movie if there is a marginal bandwidth cost. In the context of entertainment, it’s no big deal. But what about the student trying to access online research and learning resources? Doesn’t it disadvantage students who can not access unmetered broadband, since the more they use internet resources, the more money it costs?

I’m sure there are research studies from the mid-90’s talking about how the transition from hourly dialup AOL to unlimited dialup internet access made the early commercial internet thrive.

For now, unlimited service throttled to 10 Mbps on a reliable LTE connection is far more useful and productive than 30 Mbps LTE capped at 10 GB of traffic per month. Will the wireless providers have enough spectrum and backhaul to provide that? What about the next generation internet? When will wireless be able to deliver 100 Mbps or 1 Gbps to the home? This is why we need a national initiative — subsidized by federal government — to bring common carrier fiber to every home in America. Allow broadband providers to compete for customers on the network, but require that every home has access to a 100 Mbps connection within the next 5 years. It may not be universal health care or universal end to hunger, but it is what America needs to do to stay competitive and connected.

1I forgot to screen capture the speed test results. This post would have been more impressive with screen caps!)